Pagitt and Pelagius: An Examination of an Emerging Neo-Pelagianism—Final Thoughts 7

Three weeks and 8 posts later, we’ve reached the end of the “Pagitt and Pelagius” series, an indepth look at Pagitt’s A Christianity Worth Believing

and the writings of Pelagius. As I said in my preface: “I’ve heard it said around the ‘sphere that my goal is to unfairly ‘attach a thorough Pelagianism to Pagitt and others.’ I have done nothing of the sort. I walked into this examination wondering if Pagitt’s and Pelagius‘ writings mirrored each other. For years people have labeled him a Pelagian, so I wanted to see if it was true. This series will report and analyze what I found.”

I still stand by that.

My goal was to put the theological teachings of Doug Pagitt and Pelagius of Britania side-by-side in order to see if this modern theologian mirrors the ancient one. People have accused Doug of being a Pelagian and I wanted to see if that was true. So I wanted to bring an academic lens using an academic method to Pagitt’s writings in order to shed light on these accusations. Using my methdology we’ve looked at their views on human nature, sin, salvation, discipleship, and judgment. We’ve seen how they are similar and different.

The area in which they differ the most is the severity of sin and judgment. Pelagius had a very strong view of sinning after baptism, which was the point of forgiveness, salvation, and regeneration. This strong view led to a very strong view of judgment, in that those who fail in this Christian endeavor receive the punishment of hell. For him, every human is in control of their will to such an absolute extent that when they sin after salvation/baptism, having their sins washed away, it is really bad. So bad that “the punishment of hell is promised to all of us who do not live in righteousness.” Pagitt doesn’t follow Pelagius in this regard, however, because he has a low view of sin and a non-existent view of judgment.

The areas in which they are the most similar are in their views on human nature and sin, the areas that caused the most heartburn in the 5th century. Like Pelagius, Pagitt believes that we exist in the state as we were intended at the beginning of creation. Both believe that our wills are still intact and that we are capable, through our own gumption and ingenuity, to be in sync with God, to live as we were intended to live. Ethically we are not morally rebellious. We do not have a sin nature passed to us from by our natural head, Adam. Instead, we are “inherently godly” and “filled with the spark of God.” For both, we are inherently good.

Then why do we sin? We sin because of bad examples, systems, patterns, and habits. Because we are inherently godly, on our own we are capable of living in sync with God. The problem comes when the bad systems and patterns of this world impinge upon our will, causing us to “create disharmony with God and one another.” We are not the problem. Everything and everyone around us is. Our salvation, then, comes not from a sacrifice who does something with the evil, sin, and rebellion around us and in us, but instead from a better example. Both Pelagius and Pagitt need Jesus only as a moral example, because their view of human nature and sin require simply this. We do not need a new nature, because our original one is still intact. We do not need to be re-created, because we are still as we were intended at creation. All that is needed is the best example possible, the best “map and guide to what true partnership with God looks like.” Salvation comes, then, when people “follow Jesus as Joshua into the promised land of freedom and release,” because he is the new pattern of harmony for humanity by showing us what full integration with God looks like and fulfilling what people are meant to do and be.

Pagitt believes otherwise, however. In several comments, he has insisted: “I am not a Pelagian.” While he also insists that he has “spent no time with the teachings and thinking of Pelagius,” (and I don’t disregard these words) he has in no way explained why this is not the case, why he is not Pelagian. Put a different way, Doug has not articulated how his theology is different from Pelagius and why he does not mirror his views on human nature, sin, and salvation.

In fact, he has not tried to answer the questions I’ve posed in response to his views. While some have suggested I have used “a bunch of ‘gotcha’ Bible verse at the end that show why all the labels (of Pelagianism, Universalism, and Liberalism) are evil,” I have merely tried to bring this discussion back to the Text. I have disagreements with Doug’s theology on theological grounds, but more so on Scriptural grounds, which is why I’ve asked Him to explain why the Holy Scripture seems to conflict with his theology. These are legitimate questions that Doug has yet to answer:

Regarding Sin
•If something outside of us causes us to sin, why then are we in need of a new heart, according to Ezekiel 36:24-27?
•If Jesus Christ thought that what defiled a person comes “out of the heart” why don’t you? (See Matthew 15:1-20 for a refresher course.)

Regarding Salvation
•Why is Jesus even necessary to begin with? Furthermore, why was it necessary for Christ to die on the Cross?
•What do you do with the entire Book of Hebrews—let alone the animal sacrificial system of Leviticus—which explicitly argues that Jesus Christ offered Himself as a sacrifice on our behalf, by His own blood, in order to offer for all time one sacrifice for sins?

Regarding Judgment
•It is obvious you are a universalist and do not believe in a literal judgment, a separation of good and bad. What do you do with Jesus Christ’s teachings on the subject, 25% of which make-up his teachings, especially his parables?
•In light of your rejection of a real, literal judgment, what do you do with Jesus’ parables of the Nets in Matthew 13 and Wedding Banquet in Matthew 22? Both have an EXPLICIT eschatological orientation and teach about a time of judgment, where the righteous and wicked will be 1) separated and 2) punishment.

These are not “gottcha” questions, but serious questions that deserve serious answers. While Doug did say, “Jeremy, I would be glad to show how 2 Corinthians and all of Romans makes the points I am making” he has yet to do so. I don’t understand why he cannot provide more context to his own theology by dialoguing through these questions, questions which have sat at the heart of historic Christian orthodoxy for centuries.

At this point, I don’t see how Doug’s theology is different or distinguishable from Pelagius. Although, Doug, if you would still like to explain why you are not a Pelagian and how you differ from his views on human nature, sin, and salvation or how I’ve mischaracterized you if this is the case, I am all ears.

Saturday Book Review: “The Roots of the Reformation” by G. R. Evans 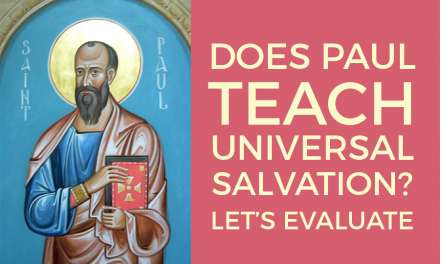