A few years ago ago my city was ravaged by a series of murders by one crazed lunatic, resulting in 7 deaths. It exemplifies the kind of conversations we need to have in face of any evil tragedy, but especially the heinous crime of mass murder that seems to now be a hallmark in the Western world.

Make that seven lives were utterly obliterated—two of which were children. Two families wiped off the face of this earth. Countless more devastated.

What’s more: a person was evil; a person sinned; a person vandalized the shalom of God’s world by doing acts of death. These seven people weren’t simply “stepped on by the machine”—they were murdered by a person in rebellion against God.

After this immense tragedy I have a burning question that bubbled-up the day after this tragedy, one I can’t quite shake: how exactly does Love Wins—the recent book written by local Grand Rapids pastor, Rob Bell—offer any ounce of hope to these grieving families, to those whose lives were raped by evil, sin, and death last week afternoon?

I realize this post may seem callous and absurdly out of place in light of Thursday’s realities. This post isn’t meant to simply argue a theological point in the wake of such a great tragedy, but call into question the gospel Story we tell in such situations. As I sat glued to the internet Thursday night I kept thinking about how important ideas are precisely for moments like this—how important the gospel of Jesus Christ is for moments like this and how important it is to get that gospel right, because it’s the only answer in the face of such tragedy.

I would love to know how Rob Bell would respond to this mass, tragic shalom vandalization in our mutual backyard. What answer would he would give to this great tragedy? How would gifting copies of his new book help ease their suffering? What hope would he offer through his gospel?

Therein lies the problem: he can’t respond. His book wouldn’t help because its gospel is hope-less.

The great irony of this book that promises the hope of a winning love is that in the face of the sulfuric stench of evil, sin, and death—in the face of grave injustice—the promise of universal salvation and unending grace without an ounce of actual, genuine justice is utterly

Sure he writes “for the earth to be free of anything destructive or damaging, certain things have to be banished. Decisions have to be made. Judgements have to be rendered;” there will be a “day when God says ‘ENOUGH!’ to anything that threatens the peace.” (37) But what Rob argues will be judged are THINGS, not people themselves. Every person will survive in the next life regardless of what they did in their few short years of life on earth now (102, 108-111, 175); it’s attitudes and acts that will not (36, 113).

Is it at all comforting to the families and communities destroyed by the sin of July 7 to say that murder will be judged, yet not the murderer himself? How is this just? To somehow, in someway render judgment against an inanimate non-being called Murder, yet the person who committed those heinous acts of shalom vandalization is not himself judged? How is it that a murderous attitude will “simply not survive…[the] flames in heaven” yet the person with those attitudes will?

According to Rob the next life will be a starting over for this shalom vandalizer where he will learn how to be human all over again. (50) Really? How is that any sense of justice? How is it that an attitude of murder will be judged and condemned, yet the murderer will live on, still having the chance to experience heaven because God will eventually melt even his hard heart?

A friend of mine once said those who have never experienced injustice personally find it incredibly easy to ask why a loving God would “punish people for all eternity for sins committed in a few short years.” (175) In the words of my friend John Frye, for Love Wins, love means never ever saying the word “hell,”

even in the face of evil, sin, and death,

because it’s is a white, western, suburban gospel.

How can a book that promises people will have endless opportunities to choose God even after death in any way account for the realities of evil, sin, death? How can a gospel in which the “love of God will melt even the hardest of hearts” (108) hold any weight in final, definitive justice?

Only the gospel of Jesus Christ can.

A gospel which believes every single person on the planet has rebelled against a holy, righteous God and is busted beyond all self-repair because they are by nature born rebels and in desperate need of a Rescuer—life is bad because we are bad.

A gospel which believes evil, sin, and death were actually dealt with when they were nailed to those very blood-soaked boards of execution that held the limp, lifeless body of our Lord and Savior Jesus Christ—Jesus was our sacrificial suffering servant who paid our price in our place when he bore our evil and sin.

A gospel in which the grave could not contain our sacrificial Great High Priest, because as the great hymn says: Up from the grave he arose with a mighty triumph o’er his foes! Through the actual, physical, bodily, witnessed resurrection of Jesus Christ death has been swallowed up in victory. Now all that remains is our collective cry: “Where O Death is your victory? Where O death is your sting?”

(Let’s be clear: unlike Rob’s belief that the cross and the resurrection are merely symbols of a deeper reality in the universe, “one we all experience every time we take a bite of food” [131], they were actual events through which evil, sin, and death were actually dealt with by God Himself. Something happened at the cross and the grave so that humans can be rescued and this world can be put back together again!)

A gospel which announces and offers the great, vast, mysterious, magical, revolutionary mercy of God that provides forgiveness of sins, reconciliation to Himself, new life now, and resurrection from the dead later—all by pure, unadulterated grace through faith in His Son Jesus Christ.

A gospel which looks forward to that glorious day in history when Jesus Christ comes again to finally put this world back together again, finally make things right by judging every single person on the planet for their belief and behavior in Him.

That’s the hope we offer a grieving city one week out.

Yes, July 7th was downright evil. It sucked. Death sucks because death is not the way it was supposed to be. But there is hope. There is hope because one day that day will be made right. It will be made right because Jesus Christ Himself will make it right. He will make it right by calling on this man to account for his deliberate choice to rebel against God by ravaging seven of His Images-Bearers through murder. And, while we do not nor should we ever glory in the death or eternal punishment of any evil, sinful person, he will be punished—though he escaped the scales of earthly justice in this life by killing himself, he will await God’s in the next.

I hope for the sake of our city on the other side of this great injustice the Church of Grand Rapids will offer the only balm that can sooth the devastation wreaked by evil, sin, and death: the hope of rescue and promise of re-creation through our crucified, resurrected Lord and Savior Jesus Christ—the real gospel of Jesus.

As I wrote before, Love Wins isn’t hopeful because it isn’t honest, and it isn’t the gospel. It is a fake gospel that offers fake hope.

And that hope is the hollowest, cruelest of them all.

The week after evil, sin, and death ravaged our city.

The (un)offensive gospel of Jesus and Judgment 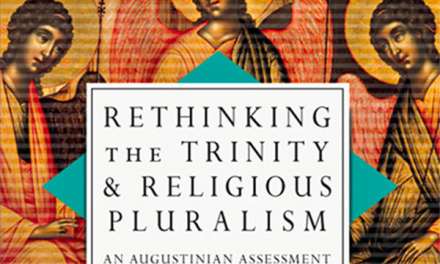 Rethinking the Trinity, Religious Pluralism, and Augustine 2 (By Keith Johnson)

What Is the Meaning and Purpose of Life?