Perhaps the most important yet overlooked sola is soli Deo gloria. David VanDrunen believes this glory-to-God-alone rallying cry is especially noteworthy, because it is “the glue that holds the other solar in place…” (15) He explores this cornerstone sola in his new book God’s Glory Alone.

His chief interest is “to consider how we might build on the Reformers’ insights and gain a deeper and fuller picture of the glory of God and its implications for Christian faith and life.” (25) He accomplishes his task by walking the reader through the glory of God made evident in Reformed theology, Scripture, and a contemporary application of God’s glory today.

Though I have a ThM in historical theology, I confess to knowing the least about this fifth sola. Having read through the beginning of VanDrunen’s work, here are 7 things I learned about this majestic heart of the Reformers’ alones, and the heart of Christian faith and life.

It Unifies the Other Solas

Rather than playing fifth fiddle to Scriptura, grate, fide, and Christus, VanDrunen contends soli Deo gloria is “the center that draws the other solas into a grand, unified whole.” (15) Strong claim, yes. Yet he believes it’s justified given how the other four were concerned with debates on religious authority and the doctrine of salvation. This fifth sola is the logical implication of the other fours’ conclusions; it’s the motto that subsumes all of the other alones.

It Ensures All Glory Is God’s, Not Ours

Disagreements between Rome and the Reformers centered on the little word alone. While Roman Catholics revered Scripture, they placed the Pope alongside it as the infallible interpreter. Same for faith: for them justification comes through faith, but also by works alongside it. The Reformers’ alones bleed out human contribution, and glory. “[The] fact that salvation is by faith alone, grace alone, and Christ alone, without any meritorious contribution on our part, ensures all glory is God’s and not our own.” (15)

Likewise, VanDrunen contends, “the fact that Scripture alone is our final authority, without any ecclesiastical tradition, magisterium, or Pope supplementing or overruling it, protects the glory of God against every human conceit.” (15) The Reformers understood how supplementing Christ’s work or the inspired word of the apostles and prophets is the ultimate prideful grasp at God’s glory. Yet Isaiah 42:8 reminds us God will share his glory with no one.

It Magnifies Luther’s Theology of the Cross

Martin Luther objected to a so-called “theology of glory” because it speculated humans were in a position to understand God as he is in himself through human reason and reaching. Luther discovered through Scriptures, however, that glory comes through suffering. As VanDrunen explains, “God is most highly glorified through the suffering of his Son; Christians know God and are glorified with Christ only by taking up their cross and following him.” (16)

Though an emphasis on God’s glory and God’s glory alone seems to demean human beings, it actually connects to human glorification. John Calvin noted this in his commentary on the “rays of glory” shining forth through human nature. “Calvin’s zeal for the glory of God, therefore, hardly entailed a demeaning view of creation or of humanity…The beauty and dignity we have, thought Calvin, reflect God’s glory manifest in us.” (20)

VanDrunen notes much contemporary reflection on soli Deo gloria calls believers “to gear all of their pursuits for the glory of God.” (22) Apparently,  Johann Sebastian Bach emphasized this in his own work, as evident by small SDGs appended to his scores. John Piper has invoked the theology of Edwards in calling Christians to delight in God. Accordingly, “the glory of God alone implies the right purpose for all of life—a God-centered purpose.” (22)

Finally, VanDrunen identifies another route contemporary writers approach this final sola: through biblical theology. Several writers have identified the glory of God as the central theme of Scripture. For instance, “[Thomas] Schreiner claims that Scripture uses the word ‘glory’ ‘broadly to capture the supremacy of God in everything.’” And G. K. Beale contends the goal of the NT storyline is God’s glory, an ultimate end of Scripture VanDrunen notes others have effectively argued.

Soli Deo gloria is “the lifeblood of of the solas,” VanDrunen argues—and successfully so. God’s Glory Alone unfolds this crucial Reformation theme in all of it’s beautiful, gospel-centered brilliance.

Engage this work yourself to help people better understand how we should think and act in God-centered rather than self-centered ways, and reinvigorate their wonder and worship to the glory of God alone. 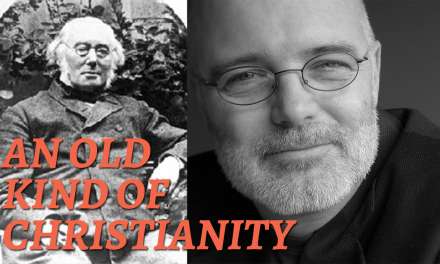 “How Do We Become Right With God?” A Historical Theological Comparison Between Aquinas, Luther, Calvin, and Wright On Justification (2–Aquinas)

How Genesis Transcends Both Liberalism and Fundamentalism